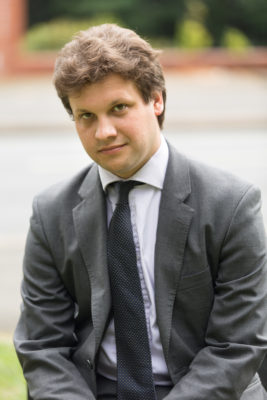 Aron Rozsa was born in Hungary and moved to Great Britain at an early age; shortly after this, he commenced his musical education.

Aron has performed across China, at venues including the Oriental Arts Centre in Shanghai (for the 2020 Chamber Concerts Series), the Tianjin Grand Theatre, the Changsha Concert Hall and a recital with the Chinese baritone, Yuan Guangquan, at the Yiwu Cultural Square Concert Hall.

Recent venues in Europe have included the Mozart Stiftung Wienersaal in Salzburg.

In 2001 Aron commenced his studies at the Royal Northern College of Music, where he studied with Mark Ray and Alexander Melnikov, completing his Bachelor of Music degree in 2005.

Aron then went on to study at the Royal College of Music in London, where he completed his Master of Music Degree in Advanced Performance in 2007, studying with John Byrne.

Aron has also been fortunate to receive the guidance of Madame Seidlhofer in Vienna and Dame Noretta Conci in London.

In 2002 Aron won second prize in the Leo Weiner and the performance of Contemporary Hungarian Music competition held as part of the Balassagyarmat International music festival and year after was invited to perform in the closing concert of the Pro Musica international festival.

Aron was a national finalist of the BBC Fame Academy Bursary Awards 2007.

Aron is the recipient of the Gwendolyn Reiche Memorial Scholarship 2005, one of the prestigious 2009 awards from the Sir George Solti Foundation, 1st Prize winner of the Salzburg Grand Prize Virtuoso International Competition and winner of a special prize in the 2nd Ise-Shima International Piano Competition.

Aron has performed throughout Great Britain and Hungary including at venues which include St Martin-in-the-Fields, London (Pianists of the World series), the RNCM Sculptors in sound – piano music of Beethoven and Tippett festival in Manchester, and a joint recital with the distinguished British pianist Andrew Wilde for Music at Sine Nomine.

Other engagements include recitals at the Wells Cathedral School in Somerset, the Warehouse in London – for the Park Lane Group Composer’s Symposium, Ealing/St Barnabas Chopin Festival, and a recital for the Edinburgh Society of Musicians.

In May of 2021, Aron will release a solo album on the US based Orpheus Classics record label, with the generous support of the Ralph Vaughan Williams Trust, of piano works by Beethoven and the British Composer Michael Finnissy, amongst others.

Future engagements include a recital at the Dalian International Culture and Arts Exchange Center, and a planned album for the US based ACIS Records, due for release in 2022.

Aron Rozsa was born in 1983 in Hungary and moved to Great Britain at the age of six. Shortly after this he commenced his musical education.

This website uses cookies to improve your experience while you navigate through the website. Out of these, the cookies that are categorized as necessary are stored on your browser as they are essential for the working of basic functionalities of the website. We also use third-party cookies that help us analyze and understand how you use this website. These cookies will be stored in your browser only with your consent. You also have the option to opt-out of these cookies. But opting out of some of these cookies may affect your browsing experience.
Necessary Always Enabled
Necessary cookies are absolutely essential for the website to function properly. This category only includes cookies that ensures basic functionalities and security features of the website. These cookies do not store any personal information.
Non-necessary
Any cookies that may not be particularly necessary for the website to function and is used specifically to collect user personal data via analytics, ads, other embedded contents are termed as non-necessary cookies. It is mandatory to procure user consent prior to running these cookies on your website.
SAVE & ACCEPT